Though it was the Annual Meeting of the Louise Saks Parliamentary Unit with several important items of business pending, the day began with a lesson, How to Be a Better Board (Not Bored) Member.

Member Dianne Bostic Robinson who works extensively with non-profit boards, helping them plan for the future, both in the short and the long term, led the group in reflecting on the present activities of the fictional Garden Gnome Society and how to proceed into a more focused and therefore, more successful future.

Nobody was silent as three groups brainstormed for ways to promote the use of garden gnomes. Indeed, were The Garden Gnome Society not an imaginary organization, some of us would be seeking corporate sponsors so some lucky downtown could have giant garden gnomes in front of every store.

After the educational program, President Barbara Bonsignore presided over the Annual Meeting where reports were offered and plans were made for delegates to attend the national NAP Convention September 4-7, 2015 in Alexandria, Virginia.

National Association of Parliamentarians (NAP) District IV Director Joyce Brown-Watkins installed the officers for the coming year of LSPU at the May Annual Meeting. 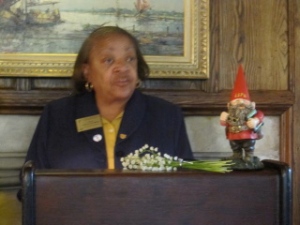 Your TIP for September 2017

Why say “I move” when making a motion?
In the past, when the British Parliament began considering a subject, a document with the proposed action was literally moved from one place to another place. We retain that idea with “I move,” signifying the beginning of taking action on a certain subject.